I’m probably a little too fascinated by other people’s bookshelves. I feel like you can tell a lot about a person by what they keep there, and I love having that little window into someone’s tastes and interests. As I’ve grown, so has my collection and not only do I have two whole bookcases back home in the UK, but I ended up buying another one when I moved into my house a while back. It’s now about five months later and I’m definitely settled, so I figured it was time to share my favourite part of my room with you… 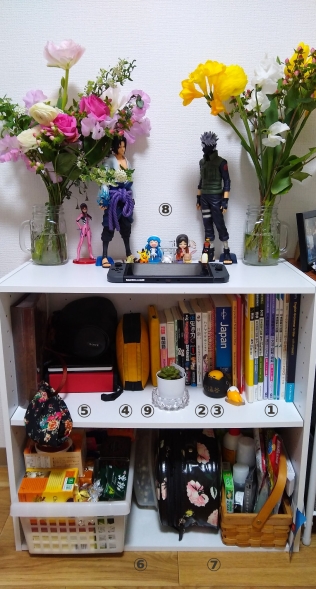 One question linguistics graduates get a lot is: “So, how many languages do you speak?” It’s frustrating because that’s not what a linguist is at all, but if you search for linguistics on any career website every job posting is really asking for someone who is either bilingual or a polyglot. You can study linguistics and be monolingual as long as you can appreciate and understand the abstract concept of language itself (trust me, I did it for five years and I have a masters’ degree) but it is true that many people do go onto study a second language or two.

I’ve always been fascinated by Japanese, given that it is so different to my native language. Never one to back down from a challenge, I started seriously studying about three and a half years ago, even going to language school in Fukuoka for a month. I still wouldn’t consider myself bilingual because there is so much further to go, but I am slowly moving my way up the JLPT exam levels.

After passing the N5 in July 2018, and the N4 in July 2019, I’m now studying for the N3. Because the exams are cumulative and contain things from lower levels too, I’m still holding onto my N4 textbooks for now, but I took practically all my N5 materials back to the UK last year. If you missed it, I published a more in-depth post about how I’m learning Japanese last week, so check it out here.

Also, one of my travel goals for the next few years is to finally visit South Korea and – maybe because of my educational background – I’m the kind of person who likes to know a little bit of the language before I travel to a new place. All of my recent trips have been in places with Japanese or English speakers, so to make myself feel more comfortable at pushing myself out of my comfort zone, I bought some materials to learn ‘survival’ Korean. However, I don’t like to make things too easy for myself, and my Korean phrasebook is in Japanese so I can solidify my ‘second’ language (if you can call it that) while picking up a third.

While my Japanese reading skills aren’t great yet, over the past couple of years I’ve bought a few manga volumes to try and practice. For the most part, this is more aspirational than something I regularly do, because I mean, even if you have been able to read hiragana and katakana for about ten years it’s still a struggle if you’re not good at kanji. Because of that, I’ve chosen series which have furigana on the more complex characters so I can look things up as I go.

First, I bought Hanayamata, a manga about a high school yosakoi club which I’ve already seen the anime adaptation of. Another series I’ve dipped in and out of it Nichijou, a quirky and comedic four-panel series which is also an anime by Kyoto Animation. Both the language and format is more simple than other manga, so I chose this one to read without much hesitation plus… it’s funny. Most recently I’ve started Kimetsu no Yaiba, which I bought after the anime went on hiatus. I’d binged the first season during my Typhoon Hagibis lockdown and because I watched it in such a short time, I missed it a lot when it was over.

Even more aspirational is the Naruto light novel I bought, but it features my two favourite characters so I couldn’t resist. Even if I just keep it as a collector’s item, that’s fine with me (but I would like to be able to read it eventually).

I’ve certainly talked quite a bit about my interest in Japanese literature, and I have quite a lot of stories in my collection. As well as six books back in England, I have about twenty four more in Japan, split between both physical copies and digital ones on my Kindle. Out of those twenty four I’ve finished fourteen, and after I’ve read the others I have another eight on my wish list. Because I’d completed 5 books before April had even begun, I think it’s fair to say I’m well on my way to hitting my goal of reading 20 J-Lit books in 2020.

As a child I read a lot, and even today, the library is still my favourite place in the whole of my home-town. Between working five days a week, keeping up my blog, travelling, and having a social life, I’m so thankful to be able to find time to lose myself in a book when I can. My Kindle has made that so much easier because I can carry a whole library around with me, but when I’m at home it belongs on my bookshelf with the rest of its ink-and-paper brethren. 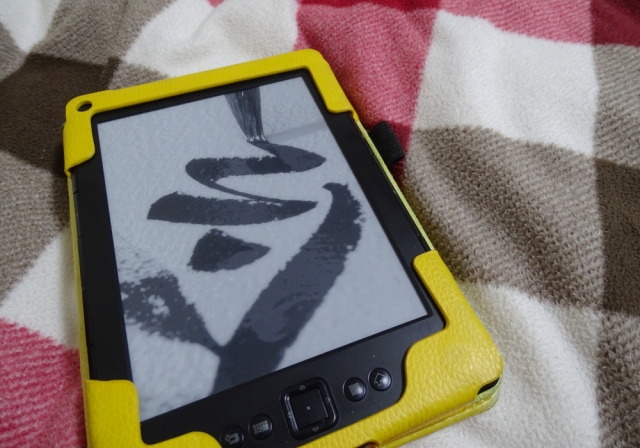 If you want to find out more about what I’m reading right now, I published a post a few weeks ago and I’ll be uploading updates sporadically across the year so watch this space!

Netflix, Crunchyroll, and other streaming services may be convenient, but there’s something about having a physical copy that I love. I’m a collector at heart (…some may say hoarder) and I like being able to hold the stuff I own. I’m aware that that completely contradicts me gushing over my Kindle earlier, but the only time I watch TV and movies is at home so there’s less need to digitise everything.

That’s not to say I don’t stream online too, but some things just aren’t available on the sites I use. I’d have to subscribe to several things at once and even then, there’s no guarantee that they’ll have the series I want so DVDs are a pretty safe bet. I usually have a mix of Disney movies, British TV shows, and anime, but the specific contents of my DVD sleeves change every time I go home for Christmas. I’m looking forward to having Marvel and Ghibli movie nights at some point soon, because I brought those back last time.

Ever since I got my camera a year ago, it’s been like my first born child. At around 350 to 400 pounds ($425–485), it’s not the most expensive one in the world, but it’s also a big step up from the cheaper point-and-shoot that I had before. It was a big decision to make that step, and one that I put off making until the battery hatch was literally hanging off my old camera. It’s been so worth it though, and I took a lot of photos that I was proud of in the last 12 months.

I was proud enough that I wanted to print some on photo paper, so I asked for a proper photo album as a Christmas present. Unfortunately I procrastinated too long, and now my original files are potentially gone for good, I might have to start from scratch. Regardless of whether my pictures can be recovered or not, more photography days should happen this year, that’s for sure. When I can leave my house again, that is.

You know you have a tea problem when you have a whole basket of it. There are black teas, green teas, fruit teas, and herbal teas… teas for sleeping and teas for waking up

My current favourite is the Yogi Tea Chai Rooibos: a caffeine free spiced tea that tastes really good with a dash of plant-based milk and a teaspoon of my ethically-sourced honey. Combining that with a relaxing jazz playlist and a good book – it’s the perfect way to end the day. 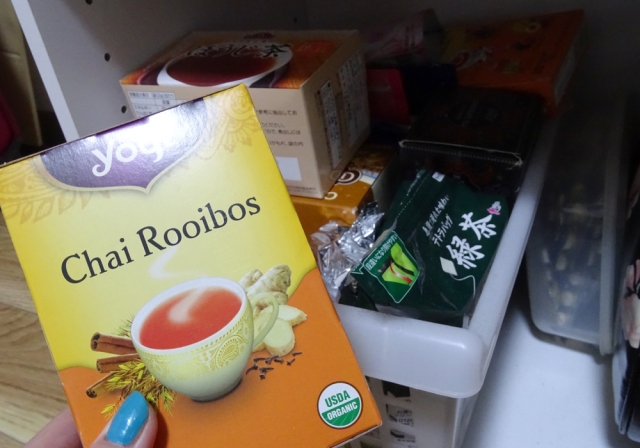 Admittedly there is some coffee and hot chocolate stuff in my basket too, but considering how the majority of it is tea, I’d better get drinking! (If anyone is interested in which teas I have, drop a comment down below and I might end up writing a post about it…)

My toiletries and first aid kit are on my shelves purely because I live in a share-house and it’s the most convenient place to put them without filling up the communal area. I decided to put them on the right side so they’re closer to my bed and I can grab a nail polish to paint my nails while watching a movie etc. Similarly, the tea crate is on the left so I can pick up a tea bag on the way out to the kitchen.

When I first moved to Japan, I told myself that I would only buy small figures if I was going to buy any at all. With the size of Japanese apartments, it would be infeasible to fill my room with stuff and also inconvenient to ship back to the UK later. But then I won a Kakashi figure at Anata no Warehouse in Kawasaki, and my resolve slipped. I’d already got a Suwa-hime figure from Suwa in Nagano, and a few gachapon prizes, but now I had big one, it felt like a free pass to get more.

I bought an Ika Musume figure in Akihabara then gave it a photo shoot at her ‘home’, Yuigahama. Later, I found a Sasuke figure to match my Kakashi at the local Book Off and I couldn’t stop myself. It’s gonna be a pain in the butt getting them to England when I eventually move back, but fortunately that’s not something I have to think of for a while.

This lil’ baby is the newest addition.

Stressed over coronavirus news, wanting something to calm me down and make things seem a little less lonely if I had to self-isolate, I bought a cheap little succulent from a 100 yen store. There’s been a recent study that suggests that indoor plants can reduce the amount of anxiety in the workplace, so why not try it in my bedroom too, especially now I’m working from home for the next few weeks?

It had been a while since I’d had a plant after accidentally killing both a succulent and a venus fly-trap, so I hope that I do better this time. I’ve done some more research and I think I didn’t give them enough sun exposure last time, which is lucky because thanks to two big windows, this room gets so much more natural light.

I hope you liked this little glimpse into my everyday life, because while I do love a good travel post it’s sometimes good to find inspiration from the mundane. I had fun writing this as it was a little different from usual, so hopefully you guys enjoyed it too.

I’m interested in finding out what’s on your bookshelves, so if you want, leave me a comment with what you have… tell us about your top three items! See you next week with a post about the rest of my room. – IgirisuJen

3 thoughts on “What’s on my Bookshelf? 🇯🇵”